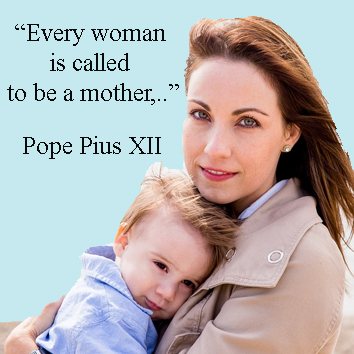 Marriage! The Beauty of Womanly Dignity

Back to Modesty
As we begin the New Year I am back to one of the recurrent themes of these articles, the need for modest dress. Just before Christmas, I went shopping for women’s clothes. In our modern era of ‘transgender this’ and ‘transgender that’, this might not seem so strange. Some might think that I have finally discovered my true gender. But Catholics know that God only created Male and Female humans. There are no transgender humans. Indeed, strictly speaking, there are no homosexual persons or heterosexual persons. A small minority of people may have homosexual inclinations just as the vast majority of people have heterosexual inclinations but regardless of this, God only created them Male and Female. He did not create homosexual and heterosexual persons. This is a man made distinction which in today’s world is being used to justify all sorts of sexual practices which are highly offensive to God.

An Immodestly Dressed Young Lady
The reason for my shopping expedition for women’s clothes came about on account of a young eighteen year old American lady who has been staying with our family for the past number of weeks. My older sons have been told that if they wish to bring any young lady to visit our house, then they need to inform these same young ladies that we operate a modest dress code in our home. So far this has simply meant that they must tell female visitors, in advance of their visit, that we generally do not allow women wearing ‘low cut tops or short skirts’ into our home. We have younger sons who are going through their adolescence and they need to be protected within our home from immodestly dressed young women. The women also need to be protected from the embarrassment of having to be told to change their clothes for something more modest.

The young American lady did not wear any low cut tops or short dresses but she mostly dressed in what are called ‘skinny jeans’ and, whilst these may be better than low cut tops and short dresses, they could not be called modest in the correct understanding of that term.

The Need for Sensitivity
I realised that I needed to speak to this young lady about how she dressed, but that I also needed to be very sensitive so as not to make her feel unwelcome or overly self conscious, especially as she was going to be staying with us for at least six weeks. It would also be hypocritical of me to say that I am not affected by immodest dress in women. I have a fallen nature and I too struggle with the impure desires of the flesh and must take care lest I fall. Ask any priest who hears men’s confessions regularly and he will tell you that sins of impurity are a huge problem in today’s internet culture.

So my approach was a simple question to her one day when she accompanied me on my trip to get the weekly family shopping.

The Questions & Answers
“Do you ever wear long dresses or skirts”, I asked. She replied with a question, “should I”. Now that she asked I spoke truthfully and said “yes, I think you should”, to which she replied “Oh”.

True Feminity
Later on I spoke to her about the beauty and dignity of true femininity, true womanhood and the crowning glory of women which is motherhood. I spoke about how men have a deep regard for true femininity and of how we naturally recognise and respect this quality in a woman and of the healthy attraction men have for real femininity. I asked her how she regarded my wife and youngest daughter, who always wear longish dresses or skirts. Her answer surprised me. She said that she was envious of them and of their obvious femininity which she instinctively recognised, and I realised that deep down, women also recognise and are attracted to true femininity.

The Desire for Modesty
After about three weeks this young lady said that she would like to change how she dressed and wear long dresses or skirts but that she did not have any. I stressed that I did not want her wearing dresses just to please me, and that she must realise that modesty is primarily not an exterior quality, but that modesty begins interiorly in the depths of a female heart that longs to please God. I was delighted that she understood this and so we arranged a shopping expedition for modest clothes with my wife and I. This is how I came to be shopping for women’s clothes, as my wife trusts my opinion in these sometimes delicate matters.

Women are Dictated to and Controlled by the Fashion Industry
I had been told before of the difficulty that women have in trying to buy modest clothes, but I was surprised, somewhat angered, and saddened at what I discovered. None of the main retailers stocked dresses or skirts that came modestly below the knee. Most of the clothes that were available could not be called modest. I realised that women are being dictated to and controlled by the fashion industry which seems to treat them as objects of desire for men. The modern fashion industry demands that women, and not just young women, flaunt their bodies. It degrades women and motherhood. It attacks true femininity, and the modern fashion industry has become a major player in the attack on family values as it also promotes immodest fashions to young pre-pubescent and teenage girls. This angered me.

How Sad that Most Women Comply with Immodest Fashions
What saddened me is that most women simply go along with the fashions. Most women seem to be unaware of the dignity of their womanhood which comes from God and through which God has chosen to increase His Kingdom. I am reminded of what Pope Pius XII said in his 1945 address to women.

Pope Pius XII on Motherhood
“Now a woman’s function, a woman’s way, a woman’s natural bent, is motherhood. Every woman is called to be a mother, mother in the physical sense, or mother in a sense more spiritual and more exalted, yet real none the less.

To this end the Creator has fashioned the whole of woman’s nature: not only her organism, but also and still more her spirit, and most of all her exquisite sensibility. This is why it is only from the standpoint of the family that the woman, if she is a true woman, can see and fully understand every problem of human life. And this is why her delicate sense of her own dignity causes her a thrill of apprehension whenever the social or political order threatens danger to her vocation as a mother, or to the welfare of the family.”

A Beautiful Transformation
In the end, we managed to find some beautiful dresses and skirts by browsing through the second hand clothes shops and the transformation and feminine beauty which now shines from this young woman is a pleasure to behold. I told her that I was going to write about her in this article and I asked her to write down a few sentences about her experience with a view to encouraging other young women to think about modest dressing. Here’s what she wrote.

Notes from Gianna on Dressing Modestly
“When I arrived at the Lacken’s I noticed many things that were different from what I am used to. One simple thing that struck me was the order in which everyone entered the house. They first allowed their mother to enter and then the other girls and then the boys. This seemed like such a simple thing at the time but it showed me the respect that was being taught within the home.

Before being asked if I ever wore long dresses or skirts I had already thought about saying that I wanted to. This was something I was not used to and it would be considered strange from the culture most of us grow up in. The reason for me wanting to wear modest clothes was because for the first time I saw the true beauty of femininity being portrayed.

We young women feel good about ourselves when complimented on how we look, so I can understand that it is hard to change. But I also understand that we do not truly feel beautiful in immodest clothes, we are looking to fit in and to belong.

Encouraging Young Women to Embrace modesty
I am so glad that I spoke to this young lady and I hope that her words will encourage other young women to think about modesty and about true femininity. We need to re-launch the crusade for modesty, that was begun by Pope Pius XI, in an effort to capture the motherly hearts of our young women and to turn those young motherly hearts towards God.