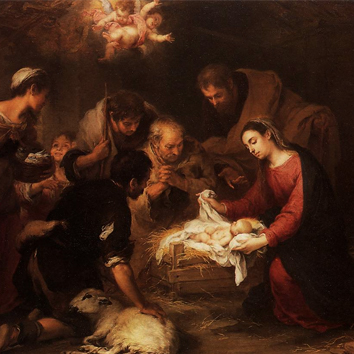 Family Breakdown
I have been doing a little research of late into the problem of absent fathers and the damaging effects the absent father has on his children, particularly on his daughters. Christmas is a sad time for many people on account of things such as bereavement, unhappy family memories, particularly those from an unhappy childhood, family breakdown and other family issues. It is a time when we must turn to the Holy Family in praise and joy but also to bring our sorrows, disappointments and struggles to the child Jesus in the manger. In the last issue we looked at the ways of co-operating in the sins of another and the importance of preparing well to receive the Christ child this Christmas through the sacrament of confession. In this regard we must realise that all of the world’s problems are caused by personal sin and that the solution to all of the world’s problems is for each one of us to make a firm resolution to become a saint.

God has a plan for Mankind
In these articles we have seen that God’s plan for man, from the beginning, is that a man should leave father and mother and cleave to his wife. It is not good for man to be alone. Man was created for family life, to become a member of God the Father’s family through baptism and through seeking to live according to the Will of God the Father, with Jesus Christ through the grace of the Holy Spirit. We also know that man is fallen and is born with the ‘stain’ of original sin on his soul on account of the disobedience of Adam and Eve in the Garden of Eden.

On Feburary 16, 2008, Cardinal Carlo Caffara (Archbishop of Bologna), after a Mass celebrated at the tomb of St. Padre Pio of Pietrelcina, granted an interview to Tele Radio Padre Pio, which was subsequently reported in the monthly magazine “Voce di Padre Pio” March, 2008.

During the interview, in answer to a query about Sister Lucia dos Santos, of Fatima, and of the charge given to him by St John Paul II to plan and establish the Pontifical Institute for the Studies on Marriage and the Family, Cardinal Cafarra replied.

The Final Battle will be about Marriage and the Family.
“At the start of this work entrusted to me by the Servant of God John Paul II, I wrote to Sister Lucia of Fatima through her Bishop as I couldn’t do so directly. Unexplainably however, since I didn’t expect an answer, seeing that I had only asked for prayers, I received a very long letter with her signature – now in the Institute’s archives. In it we find written: “the final battle between the Lord and the reign of Satan will be about marriage and the family. Don’t be afraid, she added, because anyone who works for the sanctity of marriage and the family will always be fought and opposed in every way, because this is the decisive issue”. And then she concluded: “however, Our Lady has already crushed its head.” (source Rorate Caeli)

The Family is under Tremendous Attack!
Anyone who is awake, knows and sees that the family is under tremendous attack from the forces of darkness that belong to this world. The family, based on the sacramental marriage of one man and one woman and their biological children is the cornerstone of good society and of civilisation. It is also the means through which God has deigned to increase His Kingdom. In the book of Genesis the first words of God to the man and the woman were “increase and multiply and fill the earth” (Genesis 1:28)

Sacramental Marriage has been Denigrated
Sacramental Marriage and the role and nature of Fatherhood and Motherhood have been denigrated in this modern world of ours. One American sociologist states “Fatherlessness is the leading cause of declining child well-being, providing the impetus behind social problems such as crime, domestic violence, and adolescent pregnancy. (Blankenhorn). Yet what I have found is that much of the research and much of the solutions that are offered are based on an incorrect understanding of the human being. For example, the Irish Association of Humanistic and Integrative Psychotherapy, whose therapists are permitted to operate and to run courses in “Catholic” centres in Ireland with the tacit approval of Irish Bishops, state,

“Humanistic and Integrative Psychotherapy emphasises that persons are self-regulating, self-actualising and self-transcendent beings, responsible for themselves;” (IAHIP Code of Ethics 2.1)

Humanistic Thinking is Contrary to Catholicism
This view of the human being is contrary to the Catholic view which sees human beings as being created in the image and likeness of God. We are not ‘self-transcendent’ beings, we are creatures who depend entirely on God for our existence. False solutions and false ideologies will never correct the problems facing our society.

Call no one on earth your Father
There is an interesting quotation from Jesus in St Matthew’s Gospel which puzzled me for years. “call none your father upon earth; for one is your father, who is in heaven.” (Matthew 23:9) Am I to deny my earthly father, is this what Jesus is asking me to do? This would be a simplistic understanding which misses the essential point. God is not asking us to deny our earthly fathers, He is asking us to recognise that all fatherhood comes from God. Our earthly fathers will fail us in many ways because they are fallen men, prone to sinful tendencies, and because they cannot be perfect fathers because they are not God.

No one is really Fatherless
In the totality of reality, which recognizes that humans are composite beings of both body and soul, no one is really fatherless because we have a loving Father in Heaven who is all good, who created us in His image and likeness and who loves us as no other ever can. As the father of eight children, whose ages range from 27 down to 14, two girls and six boys, I realised a long time ago that these are not really ‘my’ children. My wife and I contributed the biological means for their bodily existence, but it is the soul that animates the body and God created their souls ‘ex-nihilo’ out of nothing.

The realisation that God the Father is so close to us can be a terrifying thing when we realise our own sinfulness and just Whom it is we have offended by those very sins. But God the Father wants to be close to us. He wants to communicate His Fatherhood to us, despite the failings of our own earthly fathers. He wants to communicate His Fatherhood to my children, through me, despite the many times I have failed my own wife and children.

Christ came to teach us about the Father
This is the message that Jesus Christ came on earth to communicate to us. He came by way of a married couple St Joseph and Our Lady, whose virginal marriage was the greatest human marriage that ever existed. It wasn’t a marriage that was sexual in nature, it was a marriage of Fatherhood and Motherhood, a reflection of the relationship between Christ and His bride the Catholic Church, a ‘Holy Family’ on which to model our own families.

“All that the Father giveth to me shall come to me; and him that cometh to me, I will not cast out. Because I came down from heaven, not to do my own will, but the will of him that sent me. Now this is the will of the Father who sent me: that of all that he hath given me, I should lose nothing; but should raise it up again in the last day. And this is the will of my Father that sent me: that every one who seeth the Son, and believeth in him, may have life everlasting, and I will raise him up in the last day. (John 6:37-40)

Worldly Solutions will not help Broken Families
The psychologists and psychiatrists who offer worldly solutions to the problem of broken families seeking to re-affirm individuals by giving them self esteem and self actualisation will not fix anything. They may help people to cope with pain by placing a psychological bandage over the problem but the real problem is that God the Father is also missing from these people’s lives along with God the Son and God the Holy Spirit.

As the title of Cardinal Sarah’s latest book reads ‘God or Nothing’. As my own spiritual director said to myself and my wife “if I don’t give you Christ, I give you nothing!”. Those who try to help us without leading us to God the Father in reality give us nothing.

Let us Praise and Honour God’s beautiful design for the Family
This Christmas, let us kneel before the crib in adoration not only of the Christ Child, but also of the perfect model of family life He has given to us with St Joseph as Father, Our Lady as our Blessed Mother and Jesus Christ as our adoptive brother in the family of God the Father united through the outpouring of the Holy Spirit.

Let us resolve to defend Catholic Marriage and the Catholic Family with every fibre of our being and let us bring the love of Christ, which manifests itself most beautifully within the life giving and Sacramental Catholic Family that God the father established from the beginning so that God may be glorified for all eternity by His baptised earthly children.

May God grant you every Blessing this Christmas.