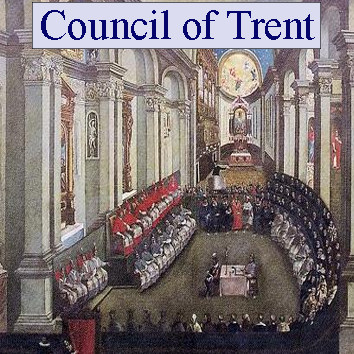 In our last article we met up with Jovinian, the heretic from the late fourth century, who dared to equate marriage and holy virginity. We saw how three of the doctors of the Church who were alive at that time came to the defence of holy virginity and we saw how the pope of the time St Siricius excommunicated Jovinian. Another doctor of the Church St Jerome, who came after Jovinian had died, further clarified the matter in his two books. Many centuries later yet another doctor of the Church, this time the angelic doctor St Thomas Aquinas, would also condemn the errors of Jovinian.

The council of Trent, which was held between the years 1545 and 1563, at its twenty fourth session, issued twelve canons concerning matrimony. The council of Trent was largely a response to the protestant reformation and once again the notion that marriage and virginity were equal but different states of life was being spread mainly through protestant writings some of which even condemned virginity as being contrary to the Gospel. Canon ten of the council of Trent on matrimony states;

“If any one saith, that the marriage state is to be placed above the state of virginity, or of celibacy, and that it is not better and more blessed to remain in virginity, or in celibacy, than to be united in matrimony; let him be anathema.”

The events recalled very briefly here, are examples of the magisterium of the Catholic Church in action. Things do not always go either smoothly or quickly in this process and sometimes there are heated exchanges and excommunications. Sometimes the good guys have been wrongfully excommunicated but this should not surprise us. Our Lord Jesus Christ came on earth doing nothing but good, healing the sick, casting out demons, instructing the ignorant, admonishing the sinners and yet He was crucified by His own people. He told His disciples, “blessed are you when men revile you and persecute you and utter all kinds of evil against you falsely on my account. Rejoice and be glad, for your reward is great in heaven, for so men persecuted the prophets who were before you.” (Matthew 5:11 – 12).

It is important to note that these magisterial teachings do not exist on their own. They are rooted in sacred scripture and, with sacred Tradition, they form the bulwark of Catholic doctrine against which all heresies are bound to fail and from which all pastoral initiatives must spring forth if they are to bear real fruit. There will always be new ideas springing up which are not rooted in these three elements of the Catholic church and there will always be heresy and proponents of heresy. We are fallen in our nature and our ego and self will always struggle to overthrow God’s will in us and this is why we must be constantly on the alert and we must root ourselves and educate ourselves in the teachings of the Church.

The Scriptural Root of Sacred Virginity

In the case of the magisterial teachings on the exalted position of virginity, these are rooted in the teachings of St Paul in chapter seven of his first letter to the Corinthians where he says “But whoever is firmly established in his heart, being under no necessity but having his desire under control, and has determined this in his heart, to keep her as his betrothed, he will do well. So that he who marries his betrothed does well; and he who refrains from marriage will do better”

I do not want to go into any more particulars of these magisterial teachings just now as they are widely available for those who are interested in reading up on them but, since the exalted position of virginity is doctrinally established by the Church, I want to have a brief look at the consequences for our society of downplaying the importance of virginity.

The Sacredness of Virginity downplayed

Utilitarian use of Sex

That these consequences flow directly from the under valuing of virginity is not that hard to prove. For if the virginal state is not an exalted state then why would anyone want to remain a virgin? If losing one’s virginity is no big deal then why wait until marriage or why reserve physical intimacy to marriage? If physical intimacy does not need to be reserved for marriage because there is nothing special about virginity, then why reserve physical intimacy to persons of the opposite sex? What difference does it make whether physical intimacy is between persons of the same sex or of the opposite sex if virginity does not matter? If being a virgin does not matter, then it follows that marriage does not really matter either so, if difficulties arise in one’s marriage, as inevitably they will, then why bother going through seemingly endless hardships in order to save the marriage? Why not move on to another physically intimate relationship with someone more caring and more understanding? Because ultimately, if virginity does not matter then we as persons do not matter and our sexual nature becomes a utility and a bodily function to be used as and when we please.

Virginity is sacred because human beings are sacred. We often hear talk nowadays about integrity in a society that places no value on virginity. Yet virginity it the epitome of integrity. The virgin is a unique, complete and whole person who, when consecrated to God, reflects the image and likeness of God that is in their soul in a way that is radiantly and dazzlingly pure.

It is vital that we comprehend this truth in all its richness if we want to defend marriage and family. Marriage and family constitute one of the greatest goods that God has given to us and yet, the virgin leaves everything, including the great good of marriage, to follow Christ along a superior path that not all are called to follow but that all must hold in the highest esteem and that all must recognise is exalted above and beyond marriage.