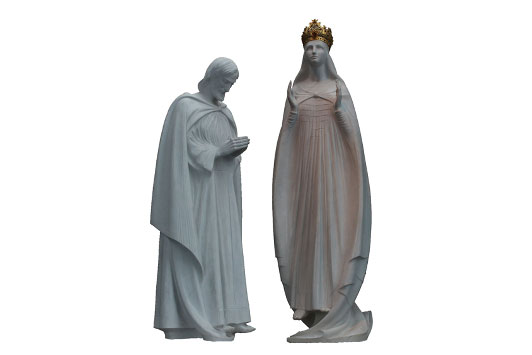 This article was first published in February 2014.  It looks at Dei Verbum in the light of St Paul’s sometimes difficult teachings on Marriage.  It is available to download as a pdf from the Marriage Articles page.

Christ, in the Gospels, laid down the essential foundations for marriage without which marriages cannot validly take place. Marriage must be between one man and one woman, they must be open to life and freely co-operate with God in the gift of procreation which is the primary end of marriage. The marriage is for life and no man may put it asunder and those wishing to marry must be free to marry; that is, free from impediment and free from coercion.

St Peter and St Paul in their writings teach us about how married life is to be lived within these essential foundations. However, before looking at St Peter and St Paul we need to take a little detour into the Church’s teachings on the nature of Sacred Scripture. Such a detour is necessary, particularly in the case of St Paul, because many in the modern world seek to denigrate the writings of St Paul claiming that he was a misogynist. St Peter agrees with St Paul in relation to marriage but somehow St Peter has escaped the ire of the feminists. Perhaps St Paul was an easier target as he was never Pope.

The second Vatican council issued the dogmatic constitution on divine revelation “Dei Verbum” on November 18th 1965. This re-affirmed the teachings on Sacred Scripture issued by the Council of Trent and the first Vatican council. Of concern to us is chapter three of Dei Verbum “Sacred Scripture, Its Inspiration And Divine Interpretation” where it states in number eleven;

“Those divinely revealed realities which are contained and presented in Sacred Scripture have been committed to writing under the inspiration of the Holy Spirit. For holy mother Church, relying on the belief of the Apostles (see John 20:31; 2 Tim. 3:16; 2 Peter 1:19-20, 3:15-16), holds that the books of both the Old and New Testaments in their entirety, with all their parts, are sacred and canonical because written under the inspiration of the Holy Spirit, they have God as their author and have been handed on as such to the Church herself. In composing the sacred books, God chose men and while employed by Him they made use of their powers and abilities, so that with Him acting in them and through them, they, as true authors, consigned to writing everything and only those things which He wanted.

Therefore, since everything asserted by the inspired authors or sacred writers must be held to be asserted by the Holy Spirit, it follows that the books of Scripture must be acknowledged as teaching solidly, faithfully and without error that truth which God wanted put into sacred writings for the sake of salvation. Therefore “all Scripture is divinely inspired and has its use for teaching the truth and refuting error, for reformation of manners and discipline in right living, so that the man who belongs to God may be efficient and equipped for good work of every kind” (2 Tim. 3:16-17, Greek text).(Dei Verbum 11)”

The Teachings of St Paul

So from this is follows that St Paul consigned to writing everything and only those things that God wanted him to write and what he has written must be acknowledged as teaching solidly, faithfully and without error that truth which God wanted put into sacred writings for the sake of salvation. Therefore one cannot claim that St Paul was a misogynist without thereby claiming that God is a misogynist.

The only other option is to claim that St Paul’s and other similar writings are not part of Sacred Scripture. Some will even try to exclude or pass over the passages in St Paul that they find disagreeable or else will claim that St Paul’s writings were relevant to the time of his writing but are not relevant to the modern world. These ideas are seemingly oblivious to the fact that to edit scripture according to one’s own tastes is to undermine one of the foundations of Christianity.

Either Sacred Scripture is inspired or it is not; it cannot be both.

In other words rather than interpret St Paul in light of modern feminist thinking the Church looks at the literary forms of the times paying due attention “to the customary and characteristic styles of feeling, speaking and narrating which prevailed at the time of the sacred writer, and to the patterns men normally employed at that period in their everyday dealings with one another.” (Dei Verbum 12) with a view to better understanding the message that the sacred writer wished to communicate.

“But, since Holy Scripture must be read and interpreted in the sacred spirit in which it was written, no less serious attention must be given to the content and unity of the whole of Scripture if the meaning of the sacred texts is to be correctly worked out. The living tradition of the whole Church must be taken into account along with the harmony which exists between elements of the faith. It is the task of exegetes to work according to these rules toward a better understanding and explanation of the meaning of Sacred Scripture, so that through preparatory study the judgment of the Church may mature. For all of what has been said about the way of interpreting Scripture is subject finally to the judgment of the Church, which carries out the divine commission and ministry of guarding and interpreting the word of God.” (Dei Verbum 12)

This means that Sacred Scripture cannot contradict itself and also, that we are not free to interpret Sacred Scripture according to our own whims and preferences but we must abide by the understanding given to us by Holy Mother Church. If the meaning of a certain passage of scripture seems to us to be obscure, or misogynistic, or contrary to reason then we must seek out the guidance of the Church so that our minds can be enlightened and formed in Christ.

With these thoughts in mind we will venture to have a look at what St Peter and St Paul teach us about how to live out the married vocation in the next article.