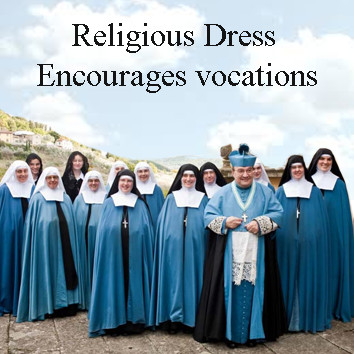 I do not belong to the fashion police! I do not belong to the modesty squad! How you dress is, generally speaking, your own business. I do not go around looking to see how people are dressed, though of course I have eyes and therefore I see things. Of late I tend to keep my eyes closed during Holy Mass as it helps me to listen better, to pray better and to avoid distractions. In these articles, when I speak of the things that I do personally, I am not saying that everyone should do likewise, I am merely sharing part of my own life’s experience in the hope of prompting discussion and thought, and in the hope the it may help somebody else.

In the course of our busy married life, I have identified a class of person whom I affectionately named the ‘should dos’. These are usually well meaning people who you meet at a gathering and who at some point of the discussion begin a sentence saying ‘Do you know what you should do?’, or in discussing a particular issue they will say ‘you should do this’ or ‘you should do that’.

What I found was, that when we were busy raising a family which at one stage had eight children under the age of thirteen, these suggestions would have placed a further burden on us as we were struggling just to cope with our daily family life. We needed people who could come and lift the burden for a while rather than suggest an extra devotional practice, or an extra routine to be adopted which, while perfectly good in and of itself, would have put us under further strain. Married life with children is tough and married couples need our support.

Proclaim The Truth with Charity

I mention this in the context of modesty because, bluntly pointing out to a person, who in all likelihood is completely unaware and oblivious to the fact that the way they are dressed may be immodest, is not helpful. When I mentioned that myself and my wife have dealt with this issue, it was on some very rare occasions, and because we felt that there was a danger to our children, particularly to our older boys, from which they needed to be protected.

One man who wrote to me, and I am very grateful for his letter, said that while he agreed with what I had written, he felt that I may be a bit wide of the goal posts because, “by far the greater difficulties caused by immodesty is by women on men”. I agree with him, but I believe that there is a need to take a look at the term modesty in its broadest and classical sense first, before narrowing it down to its current day meaning, which deals primarily with matters of purity.

In discussing this topic, someone said to be sure to mention the effects of immodesty on religious vocations! This is something that I had never thought about, that immodesty could negatively impact religious vocations. Since then, I have seen at least two aspects to this subject. One comes under the traditional understanding of modesty which has to do with dressing according to our state in life. In this context, priests and religious brothers and sisters should dress like priests, and religious brothers and sisters. In just the same way that when a guard calls to my house, (not often by the way), he is dressed like a guard. Now I am also painfully aware that there are religious sisters and probably others out there, who would love to wear the habit of their order but who are forbidden to do so by their superiors.

I recently came across an interesting article on the New York Times website which noted the increase in vocations to the Dominican order in Ireland. After pointing out that many religious orders had stopped wearing religious garb the article quoted Fr Gerard Dunne O.P. “We made a conscious decision a few years ago to wear the habit because we had no vocations and we were in a bad way. If we didn’t present ourselves in an authentic manner, who would join us? And that meant going back to the fundamentals.” The article then notes that going back to the fundamentals, which included the wearing of the habit, has led to a substantial increase in the number of vocations to the Dominican order in Ireland. How we dress, has an impact on others for good or for ill.

Immodesty snd the Lure of the World

The other aspect of immodest dress that probably negatively affects religious vocations is the lure of the world. When immodest fashions become the norm, then living a life clothed in a religious habit tends to seem extreme. Perhaps this is why so many religious orders seem to have compromised with the world and have abandoned their traditional religious habit. Perhaps they are afraid of scaring the young away.

So I think that this matter needs to be approached very delicately, but it is a topic that needs to be dealt with in the fullness of truth particularly as concerns women. It seems to me that most Catholic women who dress immodestly are unaware of the fact. We should not be surprised at this, for when is the last time you heard a sermon on modesty?

The Gentle Approach of Jesus

I am also reminded of Jesus’ approach to the woman caught in adultery found in St John’s Gospel, chapter eight. At first Jesus says nothing, but begins writing in the sand. Then He addresses the accusers, reminding them of their own sinfulness, at which point they depart. He then addresses the adulteress, using the name given to her by Adam in the garden of Eden, “Woman, where are they that accused thee? Hath no man condemned thee”. In using the term ‘woman’, Jesus restores to her the feminine dignity that she has lost through her sinful life. She replies that no man condemns her and then Jesus tells her that neither does He condemn her. So, Jesus firstly causes her accusers to depart, He then restores her dignity to her, He then tells her that He does not condemn her, and it is only after he has done these things that he addresses her sinfulness, “Go, and now sin no more”.

There is much that we can learn from this approach of Jesus.

Founder: Legio Sanctae Familiae – The Legion of the Holy Family