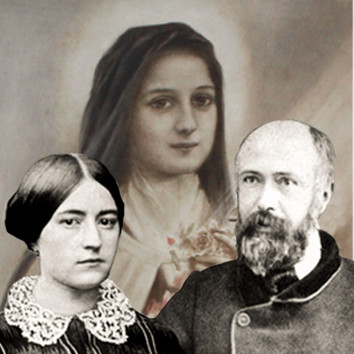 In the last article I introduced my newly found devotion to St Thérèse of Lisieux, and one comment I received was that whilst it was a good article, it did not say much about family life and prayer. I responded that, patience is a virtue, and that the article was going to be written in two parts the second of which would look at the family life of the Martins. Blessed Louis and Zelie Martin had nine children, seven girls and two boys. The two boys, Joseph Louis and Joseph Jean Baptiste died within their first year of life. Two of the girls also died in infancy, Mélanie Thérèse at just under two months of age and Hélène, who died when she was five years old. All of the other girls entered religious life. Four of them, Marie, Pauline, St Thérèse and Céline as Carmelite sisters in Lisieux and Léonie, as a Visitation sister in Caen.

So who were this family? The parents, Louis and Zelie Martin, are one of only two married couples to have been beatified by the Church. They had five religious vocations amongst their children, one a saint and doctor of the Church. We know now that they were an exceptional family but in what way were they exceptional? What did they do that was different from other families and what lessons can we learn from them in order to apply them to our own family lives? The real secret of this family is that both of the parents, even before they were married, wanted to become saints and they instilled this holy desire in each of their children from the earliest years, for they desired to have many children so that they could rear many saints for God.

Before marriage, both Louis and Zelie Martin desired to enter religious life and both took the necessary steps to fulfil this desire. Louis went to the Swiss Alps to become a Carthusian but his inability to learn Latin meant that he had to leave. Zelie applied to the Daughter’s of Charity at the hospital in Alençon but the mother superior there informed her that she did not have a vocation to religious life. So Louis, a trained watchmaker, set up a watch making and jewellery business in Alençon and Zelie enrolled in classes to become an expert at the famous Point d’Alençon lace and she in turn set up her own lace making business. Zelie began to consider the possibility of marriage and one day the hand of providence intervened. As she was crossing the bridge of Saint Léonard in Alençon she passed Louis Martin, whom she did not know, and as she passed him, she heard an interior voice which said to her, “This is he whom I have prepared for you”.

Shortly thereafter the couple met and each recognised a kindred spirit in the other and they were married at midnight on the 13th July 1858, three months after their first meeting. Initially, in their desire to become saints and to emulate Our Lady and St Joseph in their marriage, they decided to live a life of perfect continence foregoing the marital embrace. But a saintly priest persuaded them to think again about this resolution some ten months after their marriage. Zelie Martin once wrote to her daughter Pauline,

“When we had our children, our ideas changed somewhat. Thenceforward we lived only for them; they made all our happiness and we would never have found it save in them. In fact, nothing any longer cost us anything; the world was no longer a burden to us. As for me, my children were my great compensation, so that I wished to have many in order to bring them up for Heaven.”

We are very blessed in that around two hundred letters of Zelie Martin survive to this day, and they give us a rich and deep impression of the faith of this couple. Yet what is also extraordinary, is that it was in the ordinary circumstances and challenges of their every day vocation to married life that their sanctification was wrought. Fr Stéphane Joseph Piat O.F.M. has written a book titled “The Story of a Family – The Home of St Thérèse of Lisieux” published by TAN books which should be mandatory reading for every family who want to live a Catholic family life. Throughout the book we catch glimpses of how, in every detail of their lives, Louis and Zelie Martin paid their homage first of all to God and then sought to serve Him by serving others. This is the way of life that all married couples are called to by God and, there is a huge need to re-visit the profound example that this couple have set for us. In this time of so many broken and failing families, we need to re-educate all married couples in the richness and depth of the Catholic vocation to married love. Family life in this country, and in all of the western world, will continue to deteriorate until we do so. It is time to abandon the compromises that are being taught to young couples and to once again hear the voice of Our Lady at the wedding feast of Cana “Do whatever He tells you”

The heroic simplicity marked by an understanding that God’s ways are not our ways is shown clearly at the death of Zelie’s second boy Joseph Jean Baptiste, whom she had prayed earnestly to St Joseph that God would grant her. She writes,

“My dear little Joseph died in my arms at 7 o’clock this morning. I was alone with him. He had a night of cruel suffering, and I begged for his deliverance with tears. My heart felt lighter when I saw him breathe his last”, and after looking at the dead body she continues “Oh God, must I put that in the ground! But since You will it, may Your will be done!”

The above resignation to the death of a small child may seem strange in this day and age, when to a large extent we have lost our “sensus fidei”, that supernatural instinct of things Catholic. But an extract from a letter to Zelie from her sister Marie Louise, a Visitation nun in Le Mans, shows clearly the supernatural reality as they understood it.

“Oh, my dear little sister! How glad I am to see your deep faith and your resignation! You will soon find again those you mourn. Yes, your crown will be beautiful – very beautiful. Just now your heart is broken but by your acquiescence in all that God wills, there will come a fragrance which will delight the Heart of God! One day your faith and trust that never flinch will have a magnificent reward. Be sure that God will bless you, and that the measure of your sorrows will be that of the consolation reserved for you. For after all, if God is pleased with you and wills to give you the great saint you have so desired for His glory, will you not be well repaid?”

The life of the Martin family was suffused with the desire to serve God in all things. From an early age the children were taught to appreciate making little sacrifices and the value of serving others and giving alms to the poor. St Thérèse herself says, “With a nature such as my own, had I been reared by parents without virtue or even if I had been spoiled by the maid, Louise, as Céline was, I would have become very bad and perhaps have even been lost.”

From this we see the important role of parents in the Catholic upbringing of their children.