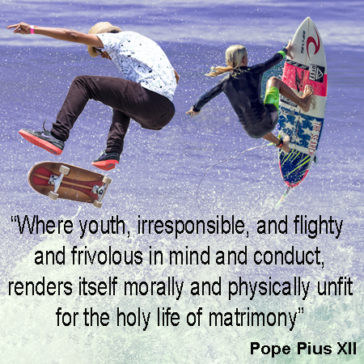 This show looks at some of Pope Pius XII’s writings shortly after the Second World War.  Many millions of men were killed in battle during the war which left many widows and a shortage of men in European societies.  The Pope is looking at the role of women.  What he says, may make some women uncomfortable.  It may even make some men uncomfortable.

He exalts motherhood, the family, the woman as homemaker and he highlights the role of women’s groups which is “to protect the dignity of the daughter, of the wife, of the mother; to preserve the home, the family, the child in their primordial order; to safeguard the rights of the family, and make all efforts bear toward the safekeeping of the child under the guardianship of his parents.”… Read the rest